Touring The City Of Charlottetown, PEI

The following morning I woke up later than planned. Even with just an hour to get ready for the day, I couldn’t leave my airbnb without walking into the back yard. There were no cows or horses. But, there was that fresh greenness with due on the grass. That tranquility that you could never get from the city. I stood there, imagining. What solitude. No one in site. What calmness. For 10 minutes, I stood in perfect stillness, and savoured it. Then, quietly walked inside to get ready for the day ahead.

All the routes were perfectly mapped: From Downtown Charlottetown to Anne of Green Gables Park. From there, I go to the Ferry Terminal. From Ferry terminal to Halifax.

Upon arriving at the Founder’s Hall, the receptionist directed me to the Harbour. Follow the boardwalk and you should see signs for the tour bus, she said. I did. I saw the woman at a small booth with the Tour company’s information: Sightseeing TOURS Grayline. I showed her my phone with the confirmation email, and she gave me an actual ticket. The tour will leave at 10:15. 10:15, I thought it was 10:00. You had me rush here for no reason? We both laughed. I was actually grateful that I had a few more minutes to roam around the harbour without feeling rushed. I parked my car across the street, for a price of $1.75 per hour. Yea, I know, $1.75 only! I could see that the big cruise ship had come in, and a lot more people were out walking around on the boardwalk, compared to the day before when I was out here.

Bob was our tour guide. He spoke on the Province’s history from Confederation in 1864, where the first meetings were held, that led to the creation of Canada in 1867. By then, Prince Edward did not sign the union. It was not until 1873, when PEI negotiated to join Canada, in order to have their railway debts financed. Barry, my seat neighbour, is from Toronto as well. He went up to New Jersey to catch the cruise, just so that he could see the Eastern side of Canada. Barry, like most people I meet on these excursions was a senior. Probably retired, and obviously have time to travel and have fun. I hate to think we have to wait until that long to see the world, or at least do the things we always wanted to do. 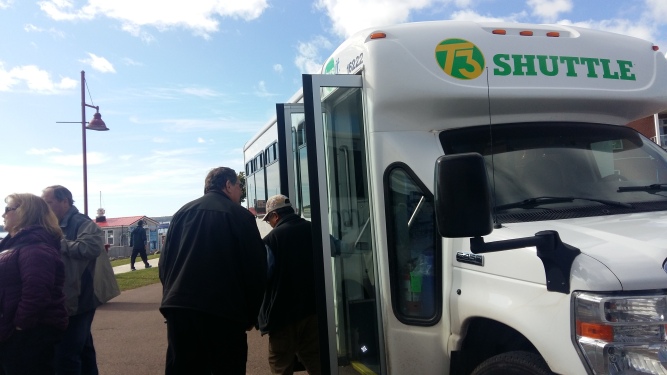 Bob talked to us about the continuous name change that the Province went through, depending on which country owned it. As a French colony, the island was named Île Saint-Jean. Then in 1763, Great Britain claimed the island, as part of Nova Scotia, then divided it, and renamed it, St. John’s Island in 1769. Meantime, the lot from North Carolina sitting across from me requested the driver to turn back on the air in the bus, as they were getting hot. I was too. I took off my sweater. Briefly, Bob asked about the hurricanes, but this couple lived inlands so they weren’t affected. There are lots of Carolians that come in to PEI, Bob said. I noticed that as well. Patty, whom I had met at Peggy’s Cove in Nova Scotia was also from there. She had come in with her grandparents, leaving her husband at home.

As Bob drove us around the city, he talked Politics, and house prices; and he made mention of names of some famous people who owned the houses we were passing, some by Governors, judges, and writers. He talked about where Will and Kate stayed when they visited, at the Lieutenant Governor’s home. He talked about the many churches, and how the University of Prince Edward Island (UPEI) replaced two previous institutions;  the Prince of Wales College and St. Dunstan’s University. Bob explained that education was affiliated with your religious background. If you were Catholic you went to one school, and if you were protestant, you go to another. But the UPEI is a liberal arts school.

The tour brought us back to the Harbour where we were picked up, and with many thanks, we went on our separate ways. So much learning in one day. History sure is taught better with being present where it took place. I don’t think I’ll forget the details I learnt about confederation, having now seen the room where the meetings were held, and where the agreements were signed. Well, I didn’t go inside the buildings, but Bob said at any point we could, perhaps on our next visit.

I went inside the Founder’s Hall to book the ferry ride back to Nova Scotia, but I was handed a brochure and told to call the toll free number to do so, or book online. With that I went to retrieve my car from the parking lot across the street. Even though I knew I stayed for at least 15 minutes pass the hour, I was only charged $1.75. I did not question it. Next stop: Anne of Green Gables Tour.

Thank you for your response. Great to hear from you. Cancel reply