Halifax is known for more than it’s wartime or maritime experiences. There is much to see here. Upon boarding the Tour bus, Ambassatours, by the Halifax Harbour near the Maritime Museum of the Atlantic, we went on our one hour drive to Peggy’s Cove, with our driver and tour guide, Ed.

Peggy’s Cove, located in the St. Margaret’s Bay, is one of those breathtaking experiences. It is a small village of approximately 40 residences who live there year round. The lighthouse, Peggy’s Point Lighthouse, established in 1868 is situated  right on the coast. I come to see that everything has some history behind it, even Peggy’s Cove. Apparently, no one is exactly certain where the name came from, but has made up stories, which passed down orally. One of the stories is that, in 1766, Saint Margaret’s Bay was named by Samuel de Champlain, after  his mother, Marguerite, and her nickname being Peggy. Another folklore about the name being, a woman was found on the Cove after a shipwreck, and later married a resident from the Cove. Since she was named Peggy, she became Peggy of the Cove. 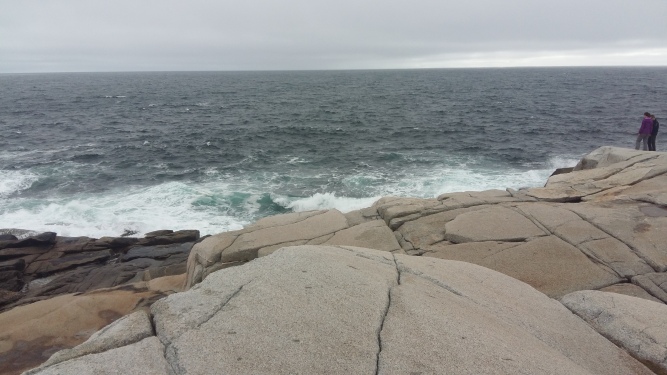 Millions of years ago, tectonic movements in the Earth’s crust, caused the rocks at Peggy’s Cove to be formed. The breathtaking landscape at the Cove was and is because of the migration of glaciers, and the thrashing ocean tides. Now, imagine standing on these rocks looking into the horizon across the big Atlantic Ocean, watching  the powerful waves beat on the rocks, and feeling the strength of the wind. The wind carrying with it small droplets of the sea that you feel on your face. Your eyes are fixated on the sea because truly there is nothing quite like it. The sea has gone wild, it seems, and the waves are tumbling over each other, in every direction. There is no order here.

We only had 75 minutes to experience Peggy’s Cove before Ed had to take us back to the city. While there were other parts of the island to walk, I felt that this section by the rocks: Walking over the rocks, and looking into the sea, far required my time and attention. How long can one stare into the sea? Til when your thoughts begin to reflect back at you. Til you can hear the ocean whisper its secrets. Til you can feel the waves in your core, with every splash or crash it makes on the rocks. Something happens. In the stillness and subtleness, something always happens.

I’m walking back towards the lighthouse. There was still 30 minutes before boarding. I passed the lighthouse and looked yonder. More rocks, and more thrashing waves. Others were out there, battling the rock climb, and the wind. I decided I had to try as well. A stranger was ahead of me, though it appeared she was climbing downwards. Now I stood above her, walking horizontally, and awkwardly. Are you going to walk across? The stranger wearing brown boots down below asked. Her boots were not the kind to be climbing on rocks. Who knew we’d be going rock climbing? It’s true. I had a whole other thought about what I’d be doing at Peggy’s Cove. I imagined I’d be on a ferry ride going out to sea, spotting whales. Sometimes, things don’t go as expected, and you simply reshape your thinking. Patty, who was from North Carolina came down on a cruise line, and now we were rock climbing together.

We made it to the top. There were so much more rocks in the distance, but we were satisfied in that instant. Standing there at the highest point, and looking across at the lighthouse, and the sea. There is that powerful feeling that you know how minute you are compared to the grandness of nature. All you have to do is respect your place, and stand there in awe.

Apparently, this small village was formed in 1811, when six German families were given a land grant by the government of Nova Scotia. The families built their economy on fishing, farming, and pasturing cattle. Today, tourism in this area has grown, and is of great economic importance. The government has restricted land use, and regulations about who can live in the region.

In 1962 the Peggy’s Cove Commission Act was passed, declaring the Peggy’s Cove a preservation area to ensure no development can occur, in order to protect the natural appearance of the Cove. So, that does it. I know that I can come back in 10 years and expect that Peggy’s Cove will remain the same. Nova Scotia’s beautiful coastal regions has gotten to me. Who wants to live on an island when we have all this beauty here in Canada? I can finally see what others have told me. Canada is a grand country. A judge once asked, Can you swim? I can. Good, you need to know how to swim if you live in this country. His point was, there is lots of large bodies of water in this country, and swimming shouldn’t be optional. Well, even though I swim, I don’t think I’d like to let myself slip into this part of the Sea at Peggy’s Cove. I’m certain these powerful tides would ravage my body before I can a chance to make one stroke. But, I love the feeling of looking at the natural rustic beauty, and let my mind flow with the wind. Until next time. Farewell Peggy’s Cove

Thank you for your response. Great to hear from you. Cancel reply